NAD+ declines with age to the point that by the time humans reach 80 years, they may only have around 4% of the NAD+ levels they did at age 21. It may be a mere coincidence, but, interestingly, the average human lifespan in modern societies today happens to be around 80 years.

As it relates to today’s age-reversal interventions, including cell rejuvenation therapies, most of these therapies are likely to work best in people with optimal levels of NAD+.

You may have heard about a study from Harvard Medical School earlier this year that identified a method to reversevascular aging. This reversal was accomplished by boosting endothelial levels of NAD+ and the cellular protein sirtuin1 (SIRT1).

Resveratrol exerts its beneficial effects mainly by boosting SIRT1. Older people, however, are so deficient in NAD+ that they are unable to fully benefit from resveratrol. That’s because SIRT1 functionality is highly dependent on NAD+.

Methods that remove senescent cells or remove toxic debris from aged cells (autophagy) will be of little benefit if there is insufficient NAD+ to enable continual youthful metabolic activity.

Hence, individuals seeking to delay or reverse certain aspects of aging should take steps to boost cellular NAD+ levels. This will likely improve responses to resveratrol and/or calorie restriction, both of which boost SIRT1. Youth factors derived from young plasma or infused stem cells are more likely to induce rejuvenation in response to higher NAD+ levels. We acknowledge the need for more experimental evidence to verify better responses to young plasma/stem cells by boosting NAD+ levels. 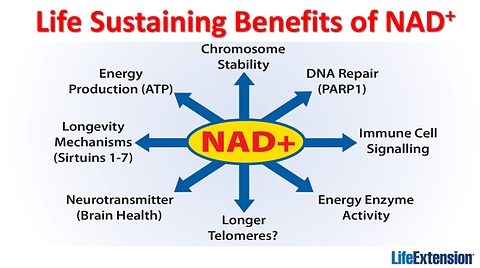 However, if you’re over the age of 45, you may want to directly boost your NAD+ levels via intravenous infusion of 500 mg of NAD+ administered every other day for a total of three infusions. This is typically done on a Monday-Wednesday-Friday schedule, with each infusion taking 4-5 hours.

The cost of the infusions can be high, so researchers are testing NAD+ patches and other delivery vehicles to bring the cost of NAD+ restoration down considerably.

Recent data indicates that after NAD+ is restored to a youthful range, maintenance doses of 500 mg/day (and higher) of oral nicotinamide riboside can maintain optimal NAD+ levels.

There was an NAD+ Treatment Center group based in San Diego RAADCity in 2018 that attendees could visit and inquire about infusions, patches, and other direct methods of boosting NAD+ (and then continue with oral NAD+ precursors to maintain youthful levels).

Below is our current list of doctors and medical clinics offering NAD+ infusions: